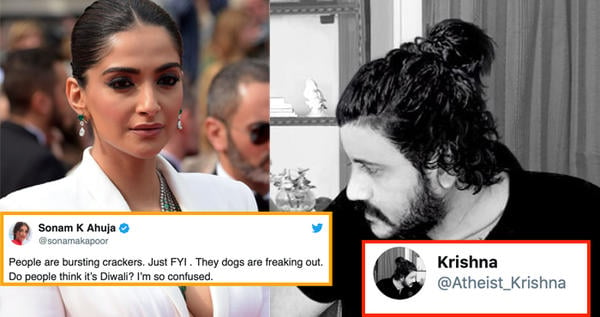 Sonam Kapoor got trolled mercilessly after she flung her against the people, who burst crackers as a part of their support to Narendra Modi's call to switch off the light and light the lamp on Sunday night.

The people of all caste, creed and race appreciated Narendra Modi's call in his emblematic fight against the novel coronavirus. Millions of people stood at their doors and balconies and lit candles, diyas, torches, and mobile flashlights for 9 minutes in a symbolic act against the darkness spread by the corona crisis. But despite Modi's request for social distancing, a few people burst crackers and celebrated the moment. The video of this visual hit the internet and created a lot of buzz in social media. Sonam K Ahuja took to her Twitter page to doom those people. She wrote, "People are bursting crackers. Just FYI. They dogs are freaking out. Do people think its Diwali? I'm so confused.”

She further tweeted, "There was complete peace and quiet, and now the birds, dogs and sirens are freaking out in south Delhi because some morons decided to burst firecrackers tonight."

Not only the social media police but even the  FWICE chief Ashoke Pandit replied to her tweet and gave her a piece of his mind. Replying to Sonam's tweet he commented, "Sonam ji crackers are burst during celebrations & not only in Diwali? People are trying to be happy in these difficult times. They are at least not spreading d virus like #TabligiJamaat. I wish you would have condemned this act of terrorism than blaming crackers."

Ever since then, Sonam Kapoor has established a permanent spot on the trend list on social media. The actress was cruelly trolled for her hypocrisy. Many even shared pictures from her past, where she can be seen bursting crackers with her family.

Well, Sonam should understand the current situation and frame her words in a way that can help to condemn any activity that goes against social distancing.

Celebrities in this Article: Sonam Kapoor

Celebrate With Lights, Not Sound

Amid coronavirus scare, Sonam Kapoor & Anand Ahuja return to India; self quarantine as a precautionary measure

Race 3 trailer trolled too much? Salman Khan reacts in his trademark style

Rishi Kapoor is bursting with pride after watching Sanju trailer