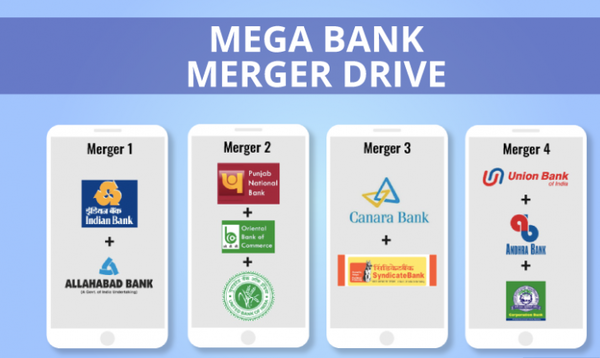 Ten Public Sector PSU banks will got merged into four banks from 1 April. In the biggest merging exercise in the banking space, the government in August 2019 had announced the merger of 10 public sector lenders into four bigger and stronger banks.

In a merger, there is a main bank and an amalgamating bank or banks, where the latter gets merged with the former. Here is all you need to know about the mega merger of PSU banks that came into force from 1 April:

1)      Oriental Bank of Commerce (OBC) and United Bank of India will be merged into Punjab National Bank (PNB). After the merger, these together will form the second-largest public sector bank in the country, after State Bank of India (SBI).

3)      Union Bank of India will be merged with Andhra Bank and Corporation Bank. Customers, including depositors of merging banks will be treated as customers of the banks in which these banks have been merged with effect from 1 April 2020.

4)      After the merger, there will be 12 PSUs - six merged banks and six independent public sector banks.

6)      Similarly, all Allahabad Bank branches will be treated as branches of the Indian Bank

7)      All branches of Andhra Bank and Corporation Bank will function as Union Bank of India branches with effect from today i.e. 1 April, 2020.

Earlier last month the cabinet gave its approval for the mergers that will consolidate operations of 10 public sector banks into four 'mega banks'.

Post Office Deposits or Bank Deposits, Which One is Better for You?

Does the RBI's New Policy on ATMs Affect You?