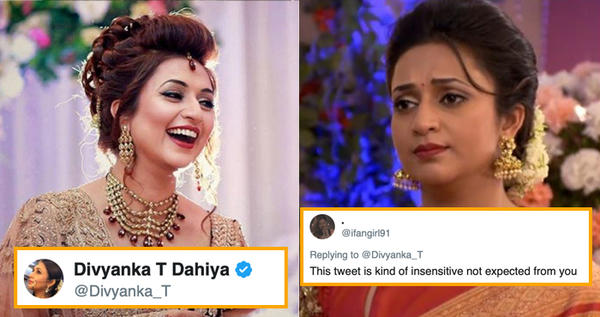 TV actor Divyanka Tripathi has apologized for her tweet where she advised that all construction work -- metro, road and bridges -- should be finalized during the coronavirus lockdown.

In an earlier tweet earlier on Tuesday, Divyanka had suggested, “With such less traffic in Mumbai, it seems like an opportunity to quickly complete metro, bridges and smooth roads.” Fans were left irate that the actor was insensitive towards the safety of engineers and construction workers. One replied to her, “As if the engineers & construction worker life are not important. Such a vague & unrequired tweet at this moment.”

Another fan wrote, “Those laborers are also human beings. It is an emergency and safety is for everyone.” One user also suggested, “Please delete this tweet. It looks impervious. Metro workers laborers are also human beings.” Paying heed to all the tweets, she deleted her tweet, realized her mistake and apologized writing, “My apologies. Point taken.”

She also wrote in another tweet, “We all are humans and susceptible to errors. In this volatile & violent social media world, important question is: If someone’s capable of realizing and apologizing. ARE YOU CAPABLE OF FORGIVING AND MOVING ON?

Angry fans were pacified with the actress's apology and even praised her for owning up to her mistake. It is reported that so far more than 130 people have been infected with this virus in India that is why everyone is serious about it.

Celebrities in this Article: Divyanka Tripathi

Rape incident of a minor on Independence Day: Divyanka Tripathi expresses her fear of having a daughter

Ranveer Singh: Would never do anything to disrespect women

Esha Gupta dismissed her engagement rumours with a tweet