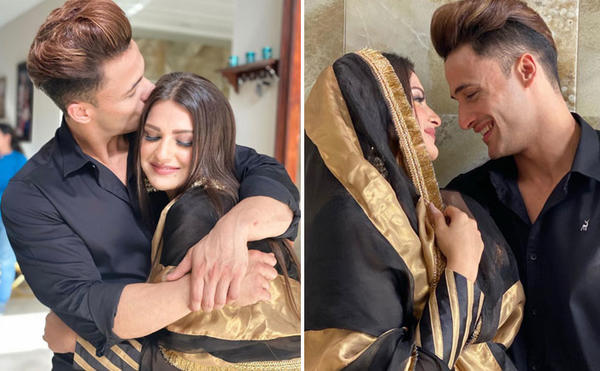 Himanshi Khurana has confirmed that she is dating Bigg Boss 13 co-contestant Asim Riaz. She also revealed that she met his family recently.

Earlier, Asim Riaz had confessed his love for the Punjabi actress on National television while he was inside the Bigg Boss 13 house. However, things got rocky when Asim's friend, Shruti Tuli came into picture and it was said that the two were dating and that Asim is lying. It was also said that the two were in a live-in relationship.

Well, recently, Himanshi, while talking to an entertainment portal, has confirmed that she is dating Asim. The Punjabi singer and actress said that she has met Asim’s family and everything is fine now.

“I met them. It was a great experience. It was only because of the show- everyone feels people are fake inside, isliye woh itna confusion aur miscommunication ho raha tha. Jab tak aap bahar aake baat nahi karte, tab tak cheezein clear nahi hoti. Now, it's all good,” Himanshi told a leading media house.

Asim and Himanshi have reunited for a music video, which will be serenaded by Neha Kakkar. The ‘Bigg Boss 13’ first runner-up also featured in a music video opposite Jacqueline Fernandez.

Celebrities in this Article: Asim Riaz

Guess Who is the Next Vivo Captain of the Week?

Get ready to see Jacqueline Fernandez and Asim Riaz together in a music video?

Aparshakti Khurana: Not many people know that I am brother of Ayushmann

Ayushman Khurana at the Opennig of Essel World FREEZE

Tori Shows You How To Burn Your Hair!

Is Bewakoofiyaan Worth a Watch?