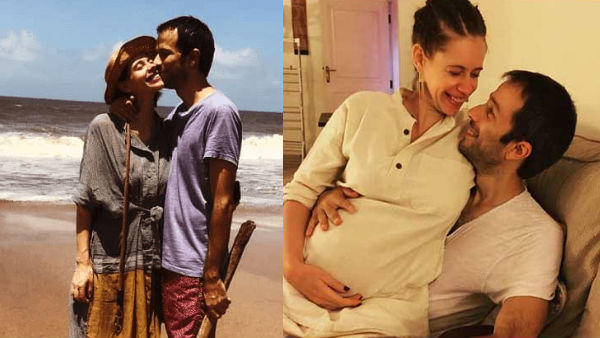 Bollywood actress Kalki Koechlin apparently gave birth to her daughter on February 7. The ‘Yeh Jawaani Hai Deewani’ actress and her boyfriend Guy Hershberg have welcomed their first child together.

While the couple hasn't announced the birth of their child, it is paparazzi who took to Instagram to reveal the news. Sharing a collage of Kalki's pregnancy pictures, Viral wrote, "Congratulations #kalkikoechlin. She had a baby girl last night.”

Kalki Koechlin enjoyed her pregnancy to the fullest and she often shared pictures displaying her baby bump. The 36-year-old actress had created a lot of buzz on social media with her bikini pictures.

The official confirmation from Kalki and Guy is yet to come. It was in September last year that Kalki confirmed her relationship with Guy Hershberg on Instagram. Sharing a picture in which she is seen with Guy on a beach, she wrote, "It's always a Sunday when I'm with my favorite caveman.”

Kalki had earlier revealed in an interview that she would give birth to her first child through water birthing. On the professional front, the ‘Shaitan’ actress was last seen in ZEE5 original web series ‘Bhram’.

We extend our sincerest felicitations to Kalki and her boyfriend for becoming parents.

Celebrities in this Article: Kalki Koechlin

A trip to Internet Birth Place...

He Will Tell You The Future
LATEST EVENTS / GALLERIES
Most Read
...loading