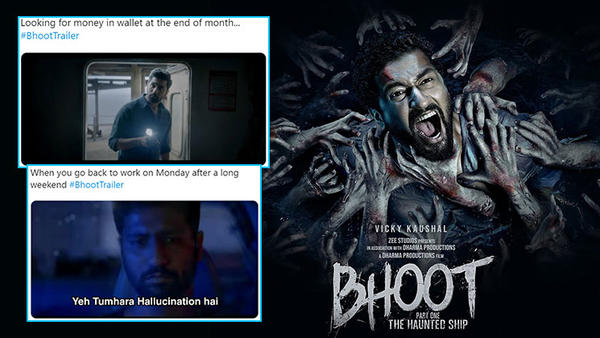 The social media never slips the opportunity to turn a film's trailer into a meme fest. That's exactly what happened on Monday night. Twitter users saw the trailer of Vicky Kaushal's forthcoming film Bhoot: Part One - The Haunted Ship and made some really funny memes on it.

The themes of the meme ranged from "Goa plans" that never come true to crush smiling back at you, netizens pointed out similarities in relatable life situations with a dialogue from the film - "Ye tumhara hallucination hai."

People poked fun at everything from UPSC exams to Vodafone. “When someone says Vodafone Provides the fastest internet,” one person wrote next to a picture of Vicky and the ‘hallucination’ line. “When crush smiles back!” wrote another.

The horror film, Bhoot Part One: The Haunted Ship is starring Vicky Kaushal in the lead role, the film is envisioned to be the first instalment in a series of horror movies, produced by Karan Johar.

Celebrities in this Article: Vicky Kaushal

What is the Birdbox Challenge, and Should You Try It?

Can Actors Like Rajkummar Rao and Vicky Kaushal Take Over from Khans?

Vicky Kaushal shares a BTS picture from ‘Bhoot Part One: The haunted Ship’ and captioned it 'Hum saath saath hain...'

Vicky Kaushal: I'm scared I wouldn't know how to act

Vicky Kaushal: Karan Johar avoided coming on the shoot of his own film

Vicky Kaushal shares a horrifying scene from 'Bhoot Part One: The Haunted Ship'

Vicky Kaushal’s Bhoot Teaser out now: The teaser will send shivers down your spine

Vicky Kaushal to romance Nora Fatehi but not in a film!