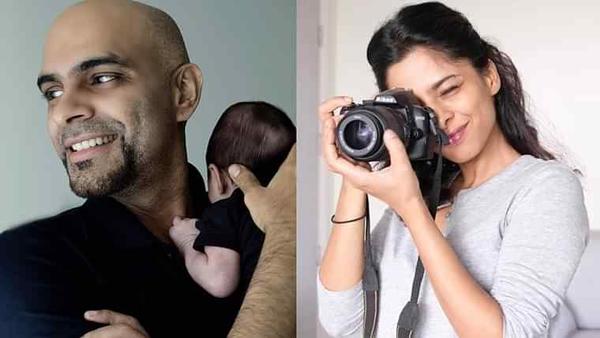 TV personality Raghu Ram and his Canadian-singer wife Natalie Di Luccio are enjoying the new-parents life to the fullest and sharing sporadic glimpses on social media.

It seems like the couple chose for a photoshoot recently with Raghu Ram's ex-wife actress and TV presenter Sugandha Garg being the one behind the lenses. His new post, presenting glimpses of baby son Rhythm, has photo courtesy assigned to Sugandha Garg. "Thank you so much for the pics," wrote Raghu. Baby Rhythm, who was born on January 6, is the adorable star of the two photos, in which Raghu introduced him and wife "proud parents": "Presenting... the proud parents!" he captioned his post and added these hashtags: "#BabyRhythm" and "#DaddyLife".

In the meantime, Sugandha Garg congratulated Raghu Ram and Natalie with a heart-felt message: "A photo to commemorate the passing of time... Welcome Rhythm...You've been born to warriors." Sugandha Garg and Raghu Ram got married in 2006 and they separated in 2016. Raghu Ram married Natalie Di Luccio in a beach wedding in December last year.

Earlier, Natalie had welcomed her child by confining an adorable poem for her son. The beautiful picture that she had shared on her social media handle had her and Raghu Ram celebrating their son's birth.

Celebrities in this Article: Raghu Ram

Mithun Chakraborty to be seen in horror-comedy film Bhootiyapa

There Is No Movement Without Rhythm