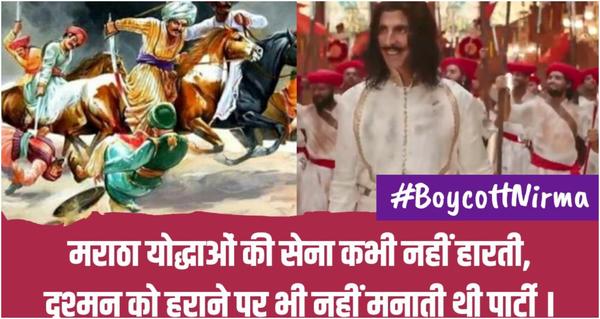 #BoycottNirma is one of the top trends on Twitter currently due to an ad featuring Akshay Kumar. In the ad, Akshay Kumar plays the role of a Maratha king whose army returns triumphant from battle and then sets about washing their own soiled clothes. "The king's army knows how to thrash enemies as well as wash their clothes," Akshay Kumar says in the ad.

The advertisement did not go well with a section of people who said it ridiculed Maratha warriors. According to a leading media times, a complaint has been funneled against the actor at Worli police station in Mumbai. The complainant, called Suryakant Jagannath Jadhav reportedly filed the complaint, saying that the ad mocks Marathi culture and has hurt the feelings of a lot of people. While filing the complaint, Jadhav also reportedly provided a CD having the video of the ad.

After the complaint, #BoycottNirma started trending on Twitter. The public condemned Akshay for being part of this ad and didn't have very kind words to say. On the work front, Akshay Kumar was last seen in Good Newwz with Kareena Kapoor.

Akshay Kumar on Kesari: I hope it will be added in the school syllabus

Akshay Kumar: I would never ever make a biopic on myself

Akshay and Twinkle shoot for an ad campaign