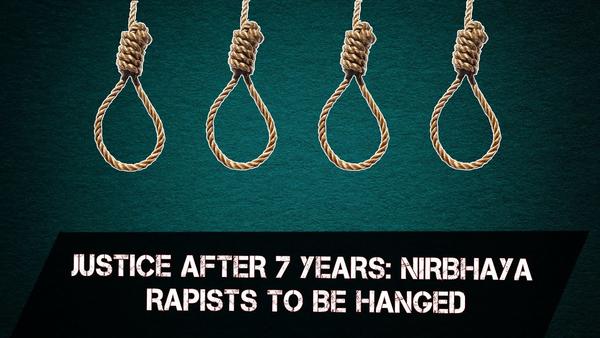 Delhi's Tihar jail is concocting for the hanging of the four convicts in the Nirbhaya murder-rape case. With this, Tihar has become the first prison in the country where four accused will be hung simultaneously. Till now, the central jail had only one plank for hanging.

Nirbhaya, a 23-year-old paramedic student, was gang raped and brutally battered on the intervening night of December 16-17, 2012, inside a moving bus in south Delhi by six persons, before being dumped on the road. She died on December 29, 2012, at Mount Elizabeth Hospital in Singapore, where she was shifted for treatment.

One of the six accused in the case, Ram Singh, allegedly committed suicide in the Tihar Jail in 2013. A juvenile, who was among the accused, was convicted by a juvenile justice board and was released from a reformation home after serving a three-year term. Remaining four convicts in the 2012 gang-rape and murder case - Mukesh, Vinay Sharma, Akshay Singh and Pawan Gupta- will be hanged on January 22 in Tihar jail at 7 a.m., the court said.

The hanging of convicts in the Nirbhaya rape case will re-establish women’s faith in law, Nirbhaya’s mother Asha Devi said on Tuesday. We are really happy with the court’s decision and we hope that it is a big relief for the victim’s family.

In Tihar Jail: Habib, The Hairstylist

How Sushant Singh's 5-Year-Old nephew reacted to the sudden demise of his Mamu!

Kanimozhi - The Princess from Tamilnadu to Tihar Jail

Hanging Out With A Kid?