Chhapaak Song Launch - What Made Dippy and Laxmi so Emotional? 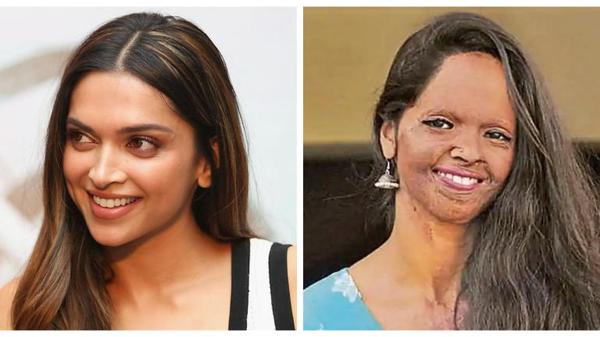 The makers unconfined the third song of the movie, Chhapaak Title Track. There was a special launch for the song. Vikrant, Deepika, director Meghna Gulzar and acid-attack survivor Laxmi Agarwal were present at the song launch. During the Chhapaak song launch, Laxmi Agarwal and Deepika Padukone got teary-eyed in Mumbai on Friday.

During a Q & A session, Deepika and Laxmi broke down. While speaking about the song director Meghna said, "It is very difficult to imagine this song. But the movie has a song, love song, romance. But the title track is the soul of the film. It is very difficult to choose a song for this film. We can't be happy nor too sad." On hearing, this Laxmi Agarwal got emotional and started crying but Deepika comforted her. Later Gulzar, who has written the song said, "You three girls (Meghna, Deepika and Laxmi) have done a great job. This film is a movement. And to make this film, the producers of the film are just amazing. It is these three who have come up and brought this story to the audience." On hearing Gulzar's Saab's words Deepika broke down. Meghna consoled her but the actress couldn't stop crying.

Talking about the movie, Chhapaak is being co-produced by Deepika and it marks her debut as a producer. Chhapaak is set to hit theatres on January 10, 2020.

Chhapaak Trailer Wins Love All Over

Chhapaak - What is It?

A Teeny Weeny Skirt For Salman

Chhapaak is my most difficult film till date: Deepika Padukone

Chhapaak: Deepika aka Malti steps out with acid attack survivors in the city to see how society responds to them

Ahead of its release, Deepika Padukone drops a new dialogue promo from 'Chhapaak'

Meghna Gulzar's Chhapaak gets a U certificate, with no cuts

Meghna Gulzar: 'Chhappaak' is a story of trauma and triumph

Deepika Padukone says 2018 has been a truly magical year

Be Intehaan - Sizzling Deepika in Race 2