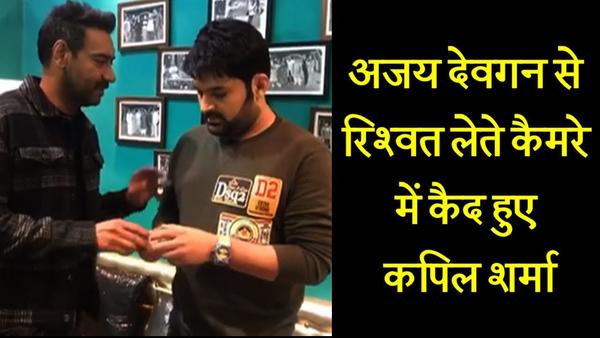 It is now a new news that Kapil Sharma takes bribe to promote a film in his comedy way. The film 'Tanhaji: The Unsung Warrior' is about to hit theaters soon, Ajay Devgn is busy promoting his upcoming film 'Tanhaji: The Unsung Warrior'. For this, he also appeared in Kapil Sharma's comedy show. Currently, its promo videos and photos have not been shared, but Kapil has unquestionably shared a clip, in which Ajay is seen bribing him.

In the shared video on the official Instagram account, Kapil is seen endorsing the film 'Tanhaji: The Unsung Warrior' in the Punjabi language which is going to be released on January 10. He appeals to the people to go and watch the film, after which Ajay comes in the frame and asks him to down the camera. However, the camera goes down and then centers on both. In this, Ajay is seen taking money from his pocket and giving it to Kapil for promotion.

Let us tell you that this is a fun video that was designed by Kapil and Ajay. Kapil wrote a funny caption with it, 'Corruption is everywhere'. People have given a lot of likes to this funny video.

Well, if you have not watched the video, do check it out.

Ajay Devgn on JNU attack: Violence is not a solution, it’s just harming our country

Ajay Devgn: We are coming up with a franchise to make more movies on warriors who fought for our country

‘I want Maharashtra to take part in his journey as much as the rest of India,' says Ajay Devgn on releasing Tanhaji: The Unsung Warrior in Marathi as well

Tanhaji – The Unsung Warrior: Kajol aka Savitribai's piercing look might make you a little uncomfortable

Sharad Kelkar: Ajay Devgn is like a big brother