A Review of Motichoor Chaknachoor 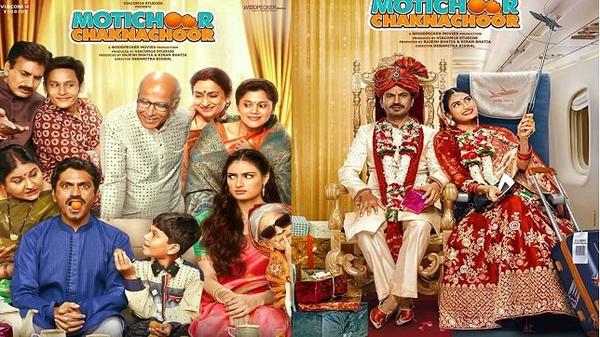 Directed by debutante Debamitra Biswal, Motichoor Chaknachoor – is a movie with no base or flexible storyline. The film is so wilted that even Nawazuddin Siddiqui lumbered with the half-baked role of a socially awkward small-town man fussing over his single status. The tall, wiry, wide-eyed Athiya Shetty is naive as a shrewish girl who enmeshes the older, shorter man with the sole aim of flying away to Dubai.

Motichoor Chaknachoor tries to capitalize on the small town setting and the usual mix of idiosyncratic characters that we have often seen in movies set in Northern India. The movie has two sets of joint families and most of their time seems to be divided between eating bountiful amounts of jalebi and trying to find the required bride and bridegroom for their respective off-springs. While it may have been envisioned as a quirky comedy of a so called oddity couple, the dull chain of events in the film makes it a tedious watch after a point. And although it tried to be a social wit, many of the dialogues and scenarios are problematic.

On the up side, there are some sincerely funny moments. Nawazuddin shines in some of the comic and emotional scenes. Athiya Shetty makes a sincere effort and pulls off some scenes impressively. Karuna Pandey as the aunt and Vibha Chibber as the mother make an impact.

You can give Motichoor Chaknachoor a miss if you value your time and sanity. The movie is an attempt with no strong direction and plot.

Why Is Nawazuddin Not Invited to Bhahi's Bashes?

How Well Do You Know Athiya Shetty?

Athiya Shetty: Nothing wrong in taking time off to better myself

Athiya Shetty's Motichoor Chaknachoor Controversy: 12 days over but no response from Suniel to the notice

Suniel Shetty: Good to see the patient choices you are making on Athiya's professional choices

Arjun Kapoor reveals all about his relationship with Athiya

Why Is Nawazuddin's Video Going Viral?