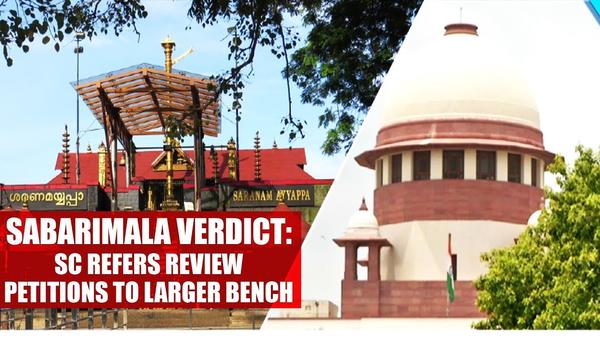 The Supreme Court referred the Sabarimala issue to a grander, seven-member bench after hearing appeals seeking a review of its decision to allow women of all ages into the temple.

While the five-judge bench solidly agreed to refer the religious issues to a larger bench. The pleas are against the apex court's verdict in 2018 which led to huge protests in Kerala. The apex court, by a majority verdict of 4:1, on September 28, 2018, had lifted the ban that prevented women and girls between the age of 10 and 50 from entering the famous Ayyappa shrine in Kerala and had held that this centuries-old Hindu religious practice was illegal and unconstitutional.

The apex court will deliver its judgement on as many as 65 petitions -- including 56 review petitions and four fresh writ petitions and five transfer pleas -- which were filed after its verdict sparked violent protests in Kerala. The Supreme Court is scheduled to pronounce at 10.30am its verdict on a batch of petitions seeking re-examination of its decision to allow entry of women of all age group in Kerala's Sabarimala Temple.

The judge constitution had heard the requests in an open court and reserved its decision after hearing the parties.

National Anthem to be played in theatres: Supreme Court

Film Producer takes Sara Ali Khan to court, over a dispute in dates for her debut film