Ayushmann Khurrana's Bala Gets into Tussle With Ujda Chaman! 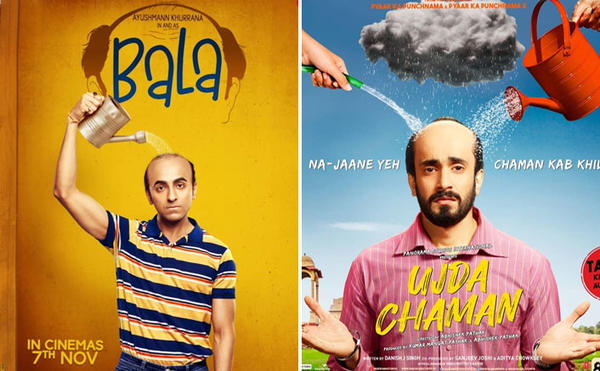 It was earlier reported that Sunny Singh starrer Ujda Chaman and Ayushmann Khurrana’s Bala were at loggerheads over copyright desecration and release date. The case was being heard in the High Court. As per the latest progress, the release for Ujda Chaman has been pushed a week prior and the film will now release on November 1.

A media report quoted director Abhishek Pathak, “Since I had announced my film first, it is better to release a week before them and enjoy a solo release.”

Bala's relase date remains unchanged. Talking about his directorial debut, Abhishek had earlier said that his movie is the official remake of Kannada comedy Ondu Motteya Kathe, to which they have the official rights. Apart from plot clash and both movies revolving around a bald protagonist, the tussle started when Bala’s producer Dinesh Vijan advanced the release date of Bala from November 15 to November 7, just one day ahead of Abhishek’s movie.

Well, it will be fun to watch both the movies on theaters and find the difference in the plot and the story. Let’s see if the tussle between Bala and Ujda Chaman bring any more heat out in public and plot.

This Basanti Does Not Want A Veeru!

Sunny Singh: I agreed to do a cameo in Pati Patni Aur Woh only because of Kartik Aaryan

Yami Gautam is her own case-study for next release Bala

Its a wrap for Ayushmann, Bhumi and Yami Gautam starrer 'Bala'!

The hit pair of Ayushmann Khurrana and Bhumi Pednekar returns with 'Bala'!

Beware, Aatma Has Been Released Today!

Trailer of the movie - The Muppets
LATEST EVENTS / GALLERIES
Most Read
...loading