KRK Starts Another Controversy with Remark About Ranveer Singh! 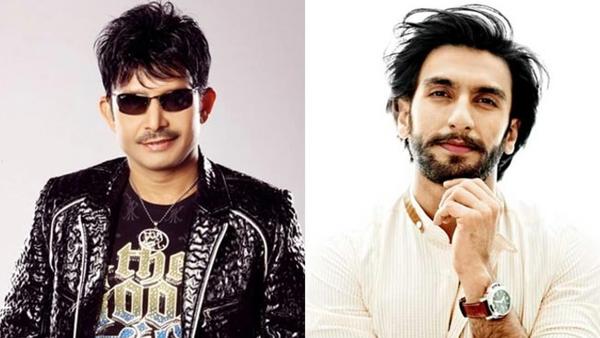 KRK is known for being unpleasingly verbal about baseless information. Enduring to do what he does best, Kamaal once again endeavored to gain some attention.

A twitter user posted a picture of Kamaal R Khan and Ranveer Singh side by side and called KRK a 'sasti copy' of Ranveer Singh. KRK perceptibly had something to say about it. KRK replied to the tweet saying,''Arey Mere Bhai Ranveer is looking #2RsPpl infront of me.''

What's more hilarious are the comments after KRK’s reply. The Twitter users did not like the idea of reading baseless remarks and reply from someone who matters nothing to anyone and bashed KRK back with retweets and quantifying remarks.

Last year, Kamaal has posted on Facebook that Kangana and her sister Rangoli has performed black magic on him as he is feeling sick since morning. The post read as, “Today is the strongest day for the attack of #BlackMagic, and I am very sick since morning. Now I am 100% sure that Kangna Ranaut and her sister Rangoli have done #BlackMagic on me!.”

Well, it is ridiculous to find people using social media as a medium to just gain baseless publicity. We would love to hear something from Ranveer’s end on the post that has currently created a buzz by comparing KRK with him.

KRK Finally Gets A Taste of His Own Medicine

What Sidharth Malhotra has to say about Kamaal R Khan

TV Actors Are Not Dumb!