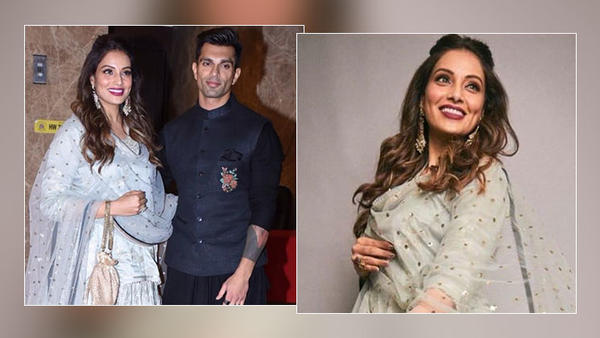 Rumors of Bipasha Basu being pregnant have been doing the circles on social media. Bipasha Basu Singh Grover and her hubby, Karan Singh Grover were spotted at producer, Ramesh Taurani’s Diwali bash last night and fans couldn't stop speculating if she was pregnant.

The Bong actress looked beautiful in a pastel green lehenga, which she teamed with heavy earrings and a half-bun, while her man, Karan, looked dapper in all black. As the couple made their entry at the party and posed for cameras, Bipasha placed the dupatta in a way that covered her body. It also might be a prospect that her lehenga was a little heavy that made it look like a slight bump on her belly but it surely gave her fans an impulse to speculate that their favorite jodi might soon be embracing parenthood.

Rumors of Bipasha Basu’s pregnancy started doing rounds when the duo was snapped at a hospital sometime back. Her hubby, Karan Singh Grover had shared with the media stating, “I don't react to it anymore because if she is pregnant, then I would be the first person to know.”

Well, we are still not very clear if Bipasha is pregnant but we would wish her all the very best if she is going to be embracing parenthood soon.

So What's Karan Singh Grover Up To?

Bipasha Basu Shows Us How To Deal With Arthritis

Bipasha Basu: Karan Singh Grover is like my twin soul

Bipasha Basu and Karan Singh Grover to tie the knot this April?

Karan And Bipasha Holiday In Maldives With Deanne Panday

Bipasha And Karan At The Femina Style Diva 2014 South

Bipasha And Karan At Film Alone Trailer And Music Launch