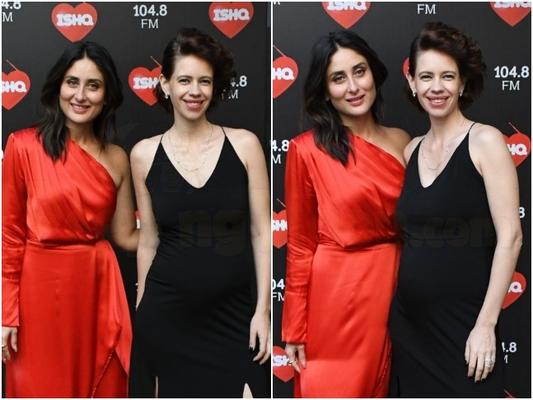 Kareena got surprised to see Kalki sporting a tiny baby bump as the actor is in the sixth month of her pregnancy.

Bollywood actress Kareena Kapoor Khan has lately been venturing into other entertainment mediums such as TV and radio shows and it has also evidenced to be lucky for this beauty diva. In the recent episode of Kareena’s radio show, Kalki Koechlin came as the guest and it was Kalki’s first appearance on the show after her pregnancy was announced.

While Kareena looked stunning in a silk red gown, Kalki was in a black dress with a double thigh-high slit and a short hairdo. As soon as the two greeted each other, Kareena pointed out at Kalki’s baby bump saying “that so tiny.” She went on to recall that when she was in her sixth month while expecting son Taimur, she “looked like a cow.”

Kalki broke the news of her pregnancy last month in an interview to Hindustan Times Brunch in September. Meanwhile, Kareena Kapoor Khan became a mother in 2016 as she gave birth to her baby boy Taimur on the 20th of December.

Kareena Kapoor Khan shocked that Kalki Koechlin is 6-months pregnant, says ‘I was like a cow'

Kareena Kapoor is back to the sets after her pregnancy

Kareena Kapoor: I want people to accept me in every phase

A special moment: Kareena gets emotional as she walks at LFW with baby bump

How to Get Rid of Stretch Marks