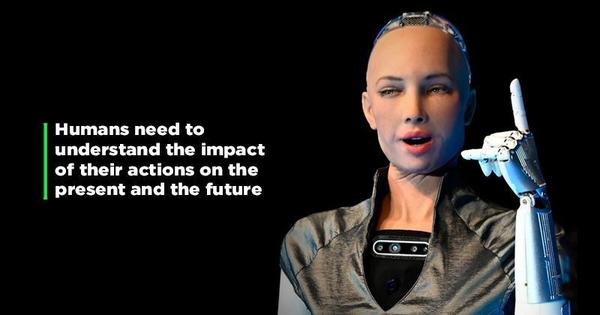 The world's first robot citizen ''Sophia'' joined the International Round Square Conference in Indore, where the robot talked about climate change, conservation of energy and sustainable development. The event was attended by over a thousand students and several luminaries.

Speaking in the conference, Sophia said that, the governments of all the countries of the world need to change both their policy and ideas when it comes to saving the planet that impacts our climate.

The event was hosted by filmmaker Uttara Singh. She spoke to Sofia on the major issues going on in the world. Sophia answered all the questions. Uttara Singh asked Sophia what kind of dance you like, and what the ideal world should be like. On this Sophia said that she likes robot dance the most, along with Sofia showed some steps of dance. Sofia also said that, algorithms, artificial intelligence are wonderful in keeping politicians and business leaders accountable.

The robot, designed by Hanson Robotics of Hong Kong, was granted the citizenship of Saudi Arabia in October 2017.

Well, we are more than pleased to have an AI speak out her views on a conference addressing world concerns.

5 Jobs That Will Be Taken Over By Robots.

Do You Recognize This Nun?

Future According to Google

A Hero Lies In You
LATEST EVENTS / GALLERIES
Most Read
...loading