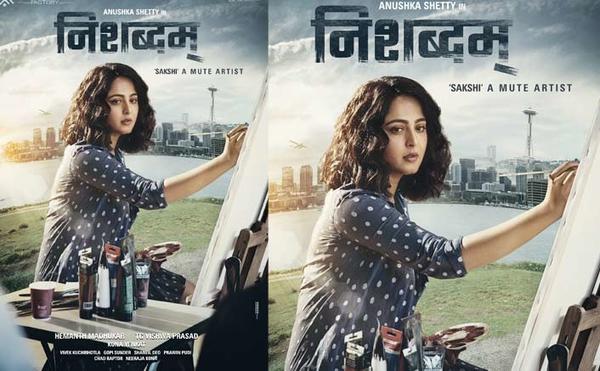 Anushka Shetty is back with her next big project, Nishabdam. Directed by Hemant Madhurkar, the film avowals of a collaborative cast including Anushka, Madhavan, Shalini Pandey, Anjali and Kill Bill fame Michael Madsen in important roles.

While the film is hyped to be a multi-lingual releasing in 5 different languages - Hindi, English, Telugu, Tamil and Kannada, the first poster reveals a rather fascinating aspect of Anushka's character from the movie. For the first time, Anushka will be seen playing the role of a mute artist on-screen named Sakshi.

On September 11, the makers unveiled the first look posters of Nishabdam. In the poster, Anushka is seen in a slightly pensive mood, painting on a canvas. The look on her face speaks a lot about the pain that she's going through.

It'll be beautiful to see Anushka intermingling into this rather challenging role, that of a mute-artist. Not to mention, the film also stars R Madhavan. However, his look from the film is yet to be released.

In Nishabdam, Anushka Shetty will play the role of an auditory impaired artist named Sakshi. She sports a new hairdo for the film, which is set against the backdrop of Seattle in the USA. We are eagerly looking forward to the movie and want to get a deeper flash of the storyline. If you are excited, tell us how much you are looking forward to watch this film.

Celebrities in this Article: Anushka Shetty