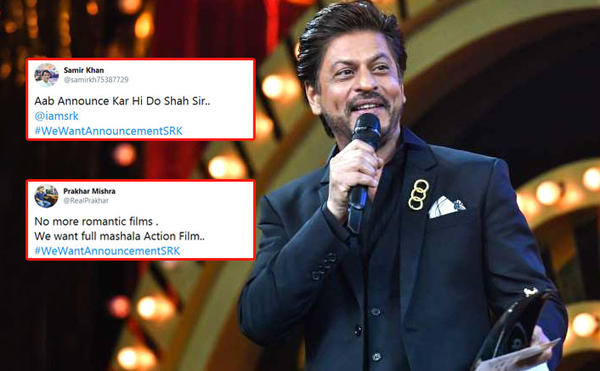 It’s been almost a year that SRK has not announced his next project. Gossips of him considering projects have been doing the rounds for a quite some time now. However, SRK's fans want something more solid than rumors of his upcoming film.

The fans want SRK to decide and publicize his next project as soon as possible. To make the voice of SRK’s fans reach the star, they started trending a hashtag #WeWantAnnouncementSRK.

Shah Rukh Khan was linked to many films over the past weeks and the actor once again slated the reports. Upset fans were not willing to take the despair lying down as they resorted to social media to challenge the actor while trending #WeWantAnnouncementSRK on Twitter. At the time of publishing this piece, the trend has gathered close to 62,000 tweets and has been shared and commented upon by fans many more times.

SRK was last seen in Ananad L Rai's Zero. Neither SRK nor the film's lead actress Anushka Sharma have announced any films or collaborations. We will have to wait a little longer before Shah Rukh Khan announces his next project.

King Khan is Looking for His Fans

Shahrukh and Farah Back To Working Together

This Will Make Kareena Scream

Kartik Aaryan: Will announce next project at the right time

After Tubelight, SRK and Kabir Khan to do another project?

Revealed: SRK will play a magician in Tubelight

Madhuri watched Fan and was floored by SRK’s performance

What will SRK’s FAN score on its opening day?

SRK’s wax statue to be dressed as Fan’s Gaurav

Biggest Gift Is Coming For Srk-Kajol Fans With Dilwale

Robert Pattison is a SRK-Kajol Fan!