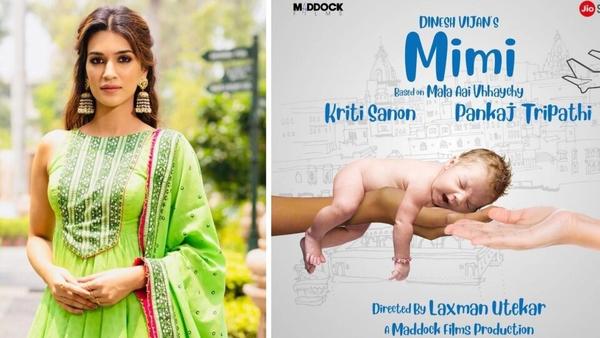 Very soon we will see actress Kriti Sanon reuniting with her Bareilly Ki Barfi co-star Pankaj Tripathi for her upcoming film Mimi, a poster of which she shared on her social media accounts on Friday. The poster of the film, which is based on surrogacy, shows two hands, one holding a newborn baby and the other extended forward to hold the child.

Sharing the first look of Mimi, Kriti Sanon captioned it: "Life is a journey filled with unexpected miracles. Get ready for a journey like never before, #Mimi! This one's going to be so special." The fans are in love with the poster of Mimi and over one lakh likes on Instagram prove it.

Mimi spins around India's steady acceptance of the concept of surrogacy. The original film of the same name, from which it is inspired, received a National Award for Best Feature Film in Marathi in 2011.

Maddock films has earlier backed socially relevant films like Hindi Medium, Badlapur, and Stree. The film is expected to hit theatres sometime in 2020.

Celebrities in this Article: Kriti Sanon

Don't Expect A DDLJ From Dilwale

Kriti Sanon to kick-start second schedule of 'Mimi' in Jaipur

Kriti Sanon opens up about her upcoming film Mimi: It is very entertaining, a beautiful script

Kriti Sanon Gearing Up For Her New Film Singh Is Bling