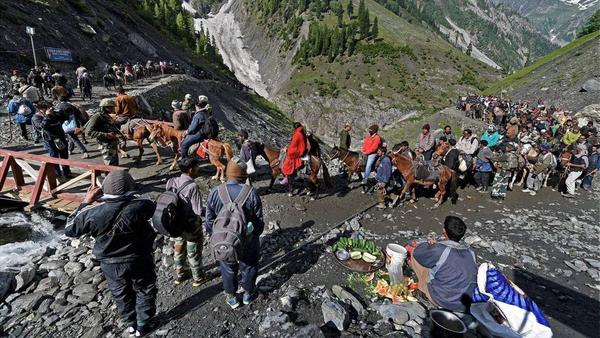 As per the latest news, the J&K government has issued a security advisory for the Amarnath pilgrims and the tourists in the Valley, advising them to restrain the trip.

The state government issued the order quoting “latest intelligence inputs of terror threats with specific targeting of the Amarnath yatra". It added that the security of all pilgrims was supreme, instructing them to take necessary measures to return “as soon as possible".

“We cannot take any risk after we found so much ammunition on the yatra route,” J&K police additional director general Muneer Khan told a media house. He said that many pilgrims had headed for tourists spots after the yatra and hence the advisory for everyone. “This is a security-related development and I don’t know anything else. We can’t stop panic reactions. The order is very clear,” said Khan.

Earlier this week, the Amarnath yatra was deferred on account of bad weather, but now it has been abridged due to security threats to the pilgrims. The sudden halting of the Amarnath yatra has further fueled speculations of possible government action in Kashmir.

The government had lately moved nearly 35,000 paramilitary troops to Kashmir. The government said it was a routine exercise but sources said this was done to prepare the ground for the retraction of Article 35 A.

Well, we hope that the threat claims are all clear and the situation of Srinagar is under control.

6 Ways in Which Your Passport is Changing

Soon Your Phone and Email Will Not Be Private Anymore!

A Train Journey That Makes Entrepreneurs

'83: Ranveer Singh and his devils take special guidance from legends

Will London Olympics Be As Safe The The CWG, Delhi?