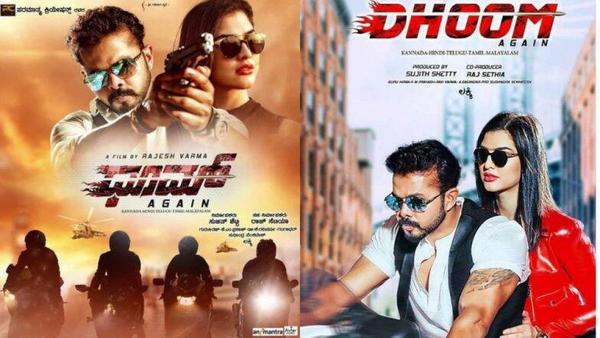 Cricketer Sreesanth is on cloud nine as even before his first Kannada film hits the screen, he has been fastened in to play the lead for his next project Dhoom Again, to be directed by Rajesh Varma. The film said to be a mega-budget movie that will be released in Kannada, Hindi, Tamil, Telugu and Malayalam.

In Dhoom Again, Sreesanth will be paired with Spanish model, Janera Idher, who will debut her entry into Kannada films. The film is being produced by Sujith Shetty and Raj Sethia with music by Guru Kiran. Dhoom Again will be realised under the banner – Paramathma Creations.

Talking about the movie, its director Rajesh Varma said in an interview to a leading media house that, “The film is just for the youth and has a very different storyline. The film will be a feast for your eyes, heart and emotions. A total entertainer.”

Discussing about Sreesanth and his role, Rajesh revealed, “Not many of you are aware that Sreesanth is also a brilliant dancer. I hope that Dhoom Again will use his dancing talents extensively.”

Illuminating that Dhoom Again is in no way related to the Hindi blockbuster Dhoom, producer Sujith Shetty said, “Since the film talks about the youth and is more of a biker’s story, we were excited about the title Dhoom. But since we can’t have the same title, we decided to go with Dhoom Again. A major sequence has been shot at Taneja Aerospace, Bengaluru, and we have used 300 superbikes and cars for it.”

Well, it will be fun to watch Sreesanth playing a role of a cop in the big budget movie like Dhoom Again. Are you excited to see Sreesanth in new avatar?

Celebrities in this Article: Sreesanth

Find out: Where Salman’s Dhoom 4 will be shot

Parineeti Chopra to star opposite Hrithik Roshan in Dhoom 4

On The Sets Of Dhoom 3 Photo Stills

These Potatoes Taste Yummier Than They Look