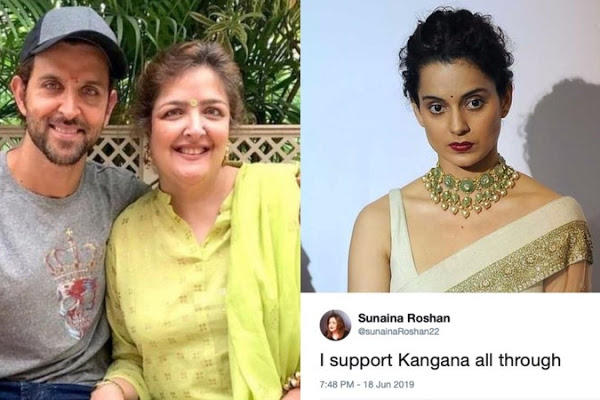 On Wednesday, 19 June, Hrithik Roshan’s sister Sunaina Roshan took to Twitter to extend her gratitude to Kangana Ranaut without stating any further context. Shortly after, Kangana’s sister Rangoli Chandel posted a series of tweets talking about the family problems that Sunaina appealed she was facing.

Rangoli Chandel, in a successions of tweets, went on to make huge claims, also exposing that Hrithik Roshan and his PR team termed Sunaina Roshan bipolar and have spread rumors about the sister. Yesterday after Kangana Ranaut’s sister Rangoli tweeted about Sunaina, she tells us that she supports Kangana in her fight for justice against Hrithik, her romance and what is causing the stress.

Sunaina shared her views on social media that Kangana and Rangoli are bringing her justice. “I will meet Kangana and Rangoli as they are the ones bringing me justice”, Sunaina told Pinkvilla. She also added that her father slapped her because she was in love with a Muslim guy. “Last year, I fell in love with a journalist Ruhail Amin, but neither my father nor Hrithik approved of the relationship. My father slapped me and said he was a terrorist”, Sunaina said.

She also said that Hrithik had promised to pay her rent, but when she took an apartment, her brother said 2.5 lakh rent is very luxurious. “She also spoke about her parents on social media- stating that they weren’t providing her any funds, so she reached out to Kangana because she speaks about women empowerment.”

Well, it seems like Sunaina Roshan has got a lot of problems and Kangana is her savior.