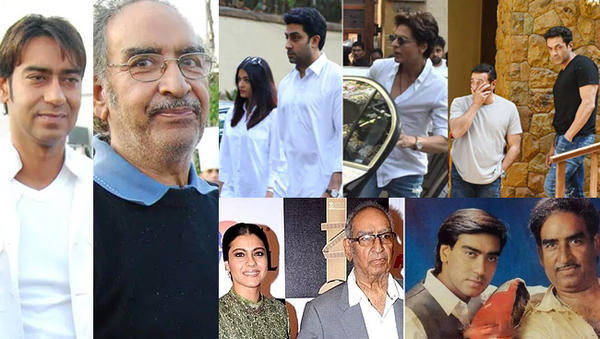 Yesterday morning, Ajay Devgan’s father, the veteran action director Veeru Devgan passed away. Veeru Devgan breathed his last at a hospital in Mumbai due to age-related issues and cardiac arrest. A large number of Bollywood celebrities attended the funeral at the Vile Parle Crematorium in the evening yesterday.

One of Veeru’s prominent action scenes was filmed on his son Ajay’s debut film, “Phool Aur Kaante” (1991) in which the new actor was seen balancing himself on two motorcycles, which became popular among the youth.

Veeru was last seen in the public eye at the film screening of Ajay’s movie Total Dhamaal. Speaking of his father some years back to a media house, Ajay had said, “The Singham in my life can only be my father. Because he is a man who came to Bombay at that point in time with Rs 4 in his pocket, wanting to become something, struggled, washed and lived in taxis so he could live here, did not eat food for eight days at times, worked so hard, became a street fighter from there till Mr. Ravi Khanna saw him one day asking him whether he would become a fight director. From there, his growth from nowhere to become India’s topmost action director is remarkable.”

Bachchans Have Company in the Panama Leaks

Kareena To Get Intimate With Ajay Again!

This Basanti Does Not Want A Veeru!

Ajay Devgan and Kajol On The Sets of Whirlpool Commercial Ad

Happy B'day to one and only Ajay Devgan (2nd April)
LATEST EVENTS / GALLERIES
Most Read
...loading