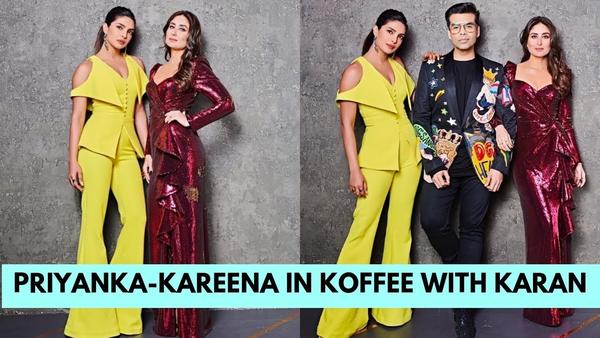 It was an astonishing sight to see Priyanka and Kareena sharing the Koffee space on Koffee With Karan season 6. Last night we saw Kareena Kapoor Khan and Priyanka Chopra Jonas closing the sixth season of the show. It was the season's finale and scrupulously, it was a really fun episode.

After such a long time, it was great seeing two leading actresses going candid about their personal lives and career. We were happy to see these divas on the Koffee couch but also unhappy that the sixth season is coming to an end.

The show began with full of spark and laughter. Karan Johar being Karan Johar put both the ladies in the most obdurate zone by pointing out that the only common thing between the two is their ex-boyfriend - Shahid Kapoor. He also went on to mention the time period for which they dated him. The show followed up with the curiosity to know if the rumors of animosity between the two were ever true. Well, this was something we also wanted to know because somewhere their previous remarks on the show made us feel so.

We absolutely loved seeing Kareena and Priyanka on the show and have our many favorite moments. This particular episode is a fitting finale to this season. The episode was worth the wait.

Here is the promo of Koffee With Karan Season 5