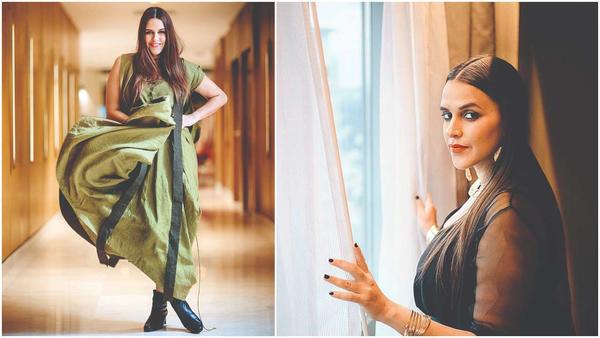 Actress Neha Dhupia got fat shamed recently and the reaction to the fat shaming article was not very pleasant from Neha’s end.

On Saturday, the former beauty queen and reality TV judge, tweeted a picture of a manual cover, with a photograph of herself and a caption reading: "Neha Dhupia shocking weight gain post pregnancy".

Neha has never been one to take such things lightly and without any reversion. The 38-year-old actress took to her Twitter account and gave it back to the publication.

She tweeted stating,” “I don’t owe anyone an explanation because fat-shaming like this doesn’t bother me one bit. But I do want to address this as a larger problem because fat-shaming needs to stop for EVERYONE and not just celebs. As a new mom, I want to be fit, healthy and energetic for my daughter. So I work out every day, sometimes twice a day because for me…’Fitness’ is a priority and not ‘fitting into’ society’s standards regarding looks.”

Karan wrote while sharing Neha's post, "Neha! You are an amazing Woman! You walk so many paths with humour...with intelligence and with abandon! It's never about losing weight, it's always about gaining perspective! And I hope the woman who wrote this has gained some today.”

Sonam said, "You are beautiful no matter what anyone says."

Director Onir said the publication and its writer "needs a basic class in learning the meaning of respect/dignity and priority".

Well, we can witness how things are changing in India and we would hope for a better future. We are with you, Neha.

Do You Know How Neha Dhupia Became Chat Show Host?

Fat Shaming: What is It?

Lose The Belly Fat with Yoga

This cat won't give up Cigarette
LATEST EVENTS / GALLERIES
Most Read
...loading