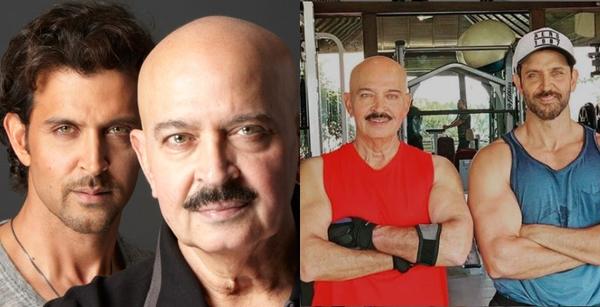 This year is not starting the merry way that it should have for Bollywood world. People are already shattered with the news that Rishi Kapoor is diagnosed with cancer, now Filmmaker Rakesh Roshan is diagnosed with early-stage cancer too.

Actor Hrithik Roshan, on Tuesday, took to his social media to divulge that his father and actor-filmmaker Rakesh Roshan has been spotted with early stage of squamous cell carcinoma, a type of cancer. The actor also revealed that the senior Roshan will undergo surgery on Tuesday.

Hrithik shared an Instagram post in which he is seen standing alongside with his father in a gym. He captioned the image saying, "Asked my dad for a picture this morning. Knew he wouldn't miss gym on surgery day. He is probably the strongest man I know. Got diagnosed with early stage squamous cell carcinoma of the throat a few weeks ago, but he is in full spirits today as he proceeds to battle it. As a family we are fortunate and blessed to have a leader like him." Hrithik wrote this along with the picture in which the father-son duo have struck the same pose.

The moment Hrithik Roshan shared the heart-warming picture with his father and publicized the shocking news, fans started pouring in good wishes. We even wish that Rakesh sir gets well soon and recovers from Cancer.

Hrithik Roshan: Coronavirus should be afraid of my dad

Will Hrithik Roshan do one more film this year?