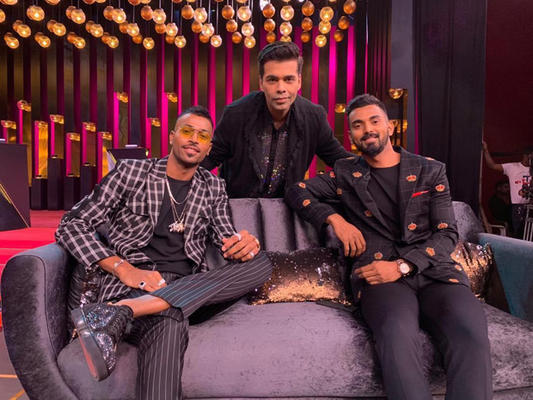 The recent episode of Koffee With Karan was one of the most entertaining episodes of the entire season till date. KJo requested two of India's most powerful and handsome cricketers - K L Rahul and Hardik Pandya on Koffee With Karan. And these young and talented sportsmen made sure the episode was full of fun, frolic and laughter.

This season has seen fairly a few uncommon groupings on the couch and they have absolutely lived up to the prospects of the audiences. In the recent episode with KL Rahul and Hardik Pandya, fans will bystander a wholly different and funny side to the cricketers. On the couch, KL Rahul made quite a revelation when he divulged to having a huge celebrity crush on Malaika Arora. He, however, did not forget to mention that it came to an end when the actress made her relationship with actor Arjun Kapoor public.

Both the cricketers are amazing on the field as a team. However, beyond their profession, Rahul and Hardik are very good friends. The new recent episode of Koffee With Karan with the handsome cricketers was really fun to witness and watch.

Which was your favorite highlight from the recent episode?

Hardik Pandya trolled for being Krystal D'souza's brother; here's what happened next

Koffee With Karan 6: Hey Hardik Pandya, your views on women are misogynistic and problematic

Who Is Poisoning You?
LATEST EVENTS / GALLERIES
Most Read
...loading