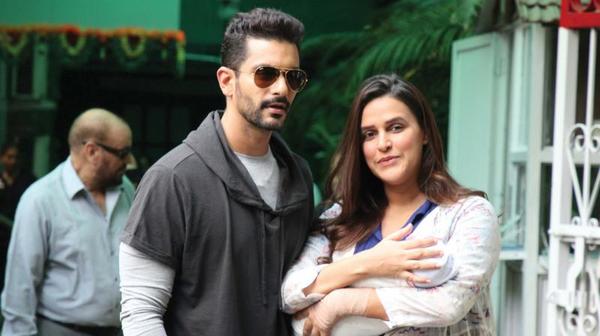 As the world goes gaga over pictures of Taimur or Misha, here's a set of new parents who have decided to say NO.

Neha Dhupia and Angad Bedi have decided that they want their little baby girl Mehr to have a normal childhood, one where a camera is not thrown into your face every time you step out! Neha says, "It is difficult to understand the pap culture today where babies' pictures are seen every day. Aditya Chopra and Rani Mukerji's daughter Adira's photos don't come anywhere. If you don't want your child's picture to come out, they won't."

Talking about her baby girl Mehr, Neha said that the baby had an uncomplicated routine - Eat, Shit, Sleep, Repeat. This routine helped her in returning to work 8 days after delivering the baby. Though Neha has been judged for this, nobody can fault her for taking this decision of keeping the paps away from Mehr.

Will Soorma be the Big Break for Angad Bedi?

Sara Ali Khan was papped in the city, as always, this Simmba actress was all smiles, see pictures!

Neha Dhupia opens up about her marriage proposal, reveals Angad never wanted to 'date' her

Make Your Own Personalized Coffee Mugs

Laugh With These Babies!