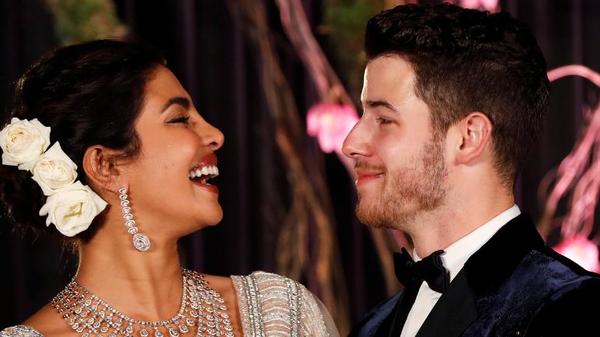 After having a dreamy wedding session, Priyanka and Nick compered a reception that was attended by Prime Minister Narendra Modi, besides other prominent dignitaries, family members and close friends.

The much-in-love couple hosted a reception party in New Delhi on Tuesday and the grand event was attended by Prime Minister Narendra Modi as well. After outlaying the weekend in Jodhpur in Rajasthan, the newlyweds landed in the national capital on Tuesday. In the evening, Priyanka and Nick appeared for a photo-op at Hotel Taj Palace's Raja Baugh area. Just like the wedding affair, the reception was also a fiercely- guarded event.

Priyanka and Nick exchanged wedding vows on December 1 at Jodhpur's regal Umaid Bhawan Palace in a Catholic rite solemnized by the groom's father Kevin Jonas Sr. It was trailed by an equally grand wedding as per Hindu traditions on December 2.

The couple shared a number of pictures from their Mehndi and Sangeet festivities but the shroud on the final twin ceremonies was lifted by a leading daily magazine on Tuesday. The US-based publication had the exclusive access to the wedding ceremony.

We wish all the best to the lovely couple and wish them to have a happy married life.