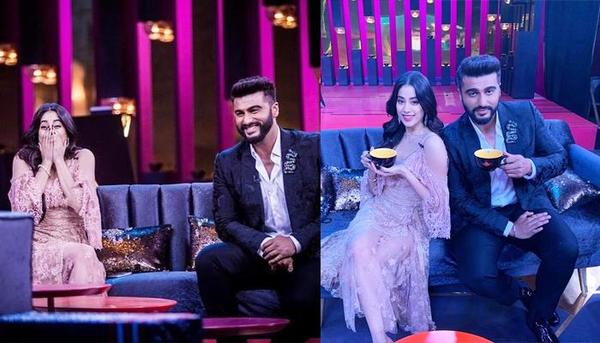 In the upcoming episode of Koffee with Karan, it’s confirmed now that Arjun and Janhvi will be appearing together, reports suggested that this vibrant duo will make it to the first episode of this season.

It would be stimulating to see these two on Koffee with Karan. Apart from boiling revelations, we are also excited to see how Arjun and Janhvi’s equation unfolds during the conversation.

Janhvi says in the promo, “I don’t know what hook up means,” and Arjun takes a dig at her in prank and comments, “Have you met Poo bani Parvati?”. In the rapid fire round, Karan asks Janhvi to choose between Deepika and Katrina, Janhvi selects Deepika and says, “We’ll listen to South Indian music together.” Arjun says that Deepika may become Thangabali on her at night. Karan also asks Janhvi about rumors of her dating Ishaan Khatter and she denies it. Karan then asks Arjun if he thinks she is dating Ishaan, to which he replies, “He is always around her.” When Arjun too starts pulling her leg by teasing her with her Dhadak co-star Ishaan Khatter, Janhvi remarks, “Whose team are you on?”

Well, it seems like Arjun Kapoor has given us hints about Jahnvi’s boyfriend. What do you think about Jahnvi and Ishaan being an off-screen happy couple?

Koffee With Karan 6 to Kick Off With new Faces!

Janhvi Kapoor and Ishaan Khatter break up for professional reasons?

Janhvi Kapoor: Mom always told me to be a good person