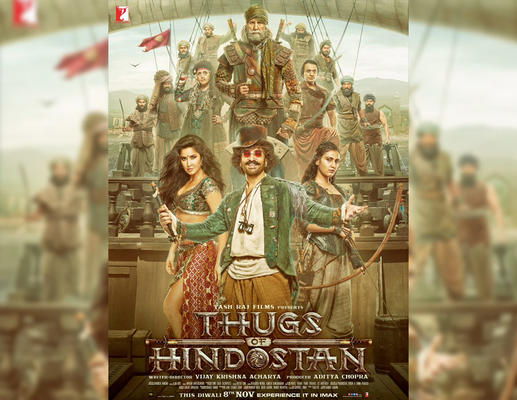 The recent release of Aamir’s Thugs of Hindostan is getting a lot of hate and anger from fans and audience across the nation. Well, though the movie cast is huge, the storyline somewhere did not justify the plot and the frame.

Here we have major 4 reasons why the audience didn’t like the Thugs of Hindostan:

The worn-off concept of mutineers: Thugs of Hindostan gets the story right from the 5 minutes of the start. Three Musketeers (Aamir, Amitabh and Fatima) inflicting havoc on the white people brigade, eventually lashing them off their lands. Did it sound original or new?

The fluctuating character of Aamir Khan: We cannot make our mind to whether to hate Firangi Malla or to embrace him. One moment Aamir’s character is a British loyalist who pursues zilch but money. In the other moment, he joins the Azad army.

Katrina Kaif in a cameo: Yes, you read it right. It is true that the gorgeous and very talented actress Katrina Kaif is not only underused in Thugs of Hindostan, but also condensed to a mere protracted cameo.

Lack of plot and overall storyline: The movie has a huge cast to grasp people if the storyline was little strong and flexible. The disappointing moments in the movie gave flame to criticism because of poor storyline and base.

So, we observed the above points that made Thugs of Hindostan one of the biggest flops of the year.

Thugs Of Hindostan trailer is out: The Thugs are here to steal your heart

Thugs of Hindostan will release on November 8