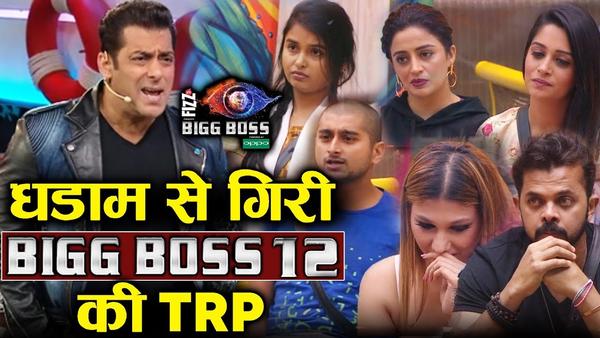 This season of Bigg Boss is losing its charm and going low in TRP too. Last 11 seasons of Bigg Boss has made the show the number one trending show of the nation, however, the recent one is out of the race to gain TRP and is moving towards boredom.

Bigg Boss 12's shocking TRP has been revealed. The contentious reality show is out from TRP race. Yes. Naagin 3 again manages to stay on the top while Bigg Boss is out from even top 10. Bigg Boss 12 has occupied 15th spot in the TRP game.

What could be the reason for low TRP this season for Bigg Boss? Well, the show is telecasted the same time when ‘Kaun Banega Crorepati or Indian Idol’ is broadcasted in other channels, which could be a reason for the shift of audience from one channel and show to another. Also, Bigg Boss 12 is not able to match the drama if we compare it with its previous seasons.

Well, we hope that the show will bring some more masala and good tasks in the house for the audience to watch the episodes and follow the season without any shift. We hope to see Bigg Boss 12 back in the TRP top.

Bigg Boss 12 Excitement Begins as We Hear Debina-Gurmeet Might be In!