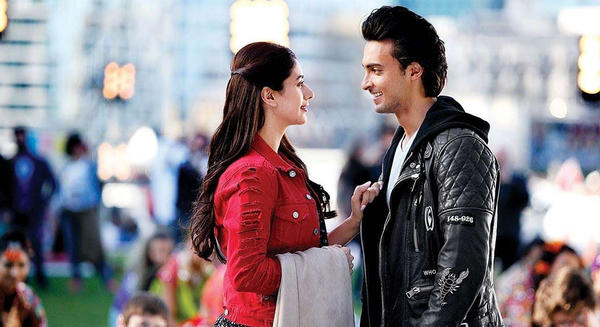 Recently a movie got released named Loveyatri. The movie is a rom-com and highlights how love can be pulled and pushed within some strangled days.

The storyline of the movie seems vague and the actors-Aayush and Warina fail to amaze in their debut film and have zip chemistry, although the poorly written romantic track might have a role to play in the latter. Aayush's unidimensional performance is one degree better than Warina's insipid countenance throughout the film. She is stunning to look at, but that's all she has to show to the audiences. Even veteran actors Ronit Roy and Ram Kapoor are off the mark in the film.

Loveyatri lacks both fanciness and reasoning. The clichéd narrative and half-baked love make it a dreary watch. And the less we discuss the film's logic, the better. There is a character who does not think twice before bordering someone for assault but takes an unfathomable U-turn after being told, "Don't play dirty games. Play Garba." Okay, then.

The jokes in Loveyatri seems like a forced humor which can just create more suspicion and no laughter. Also, if you were waiting for a special appearance by Bhai (Salman Khan), there is none. In Loveyatri, director Abhiraj Minawala takes the as-old-as-time way of a poor boy falling in love with a rich girl but fails to pervade any life into it. The cast of the movie is- Aayush Sharma, Warina Hussain, Ram Kapoor and Ronit Roy.

Celebrities in this Article: Aayush Sharma

Will Akshay Strike Gold With Boss?

Ronit Roy's film The Line Of Descent screens at Berlinale

Warina Hussain talks about her modelling days, audition anxiety and her journey into Bollywood.