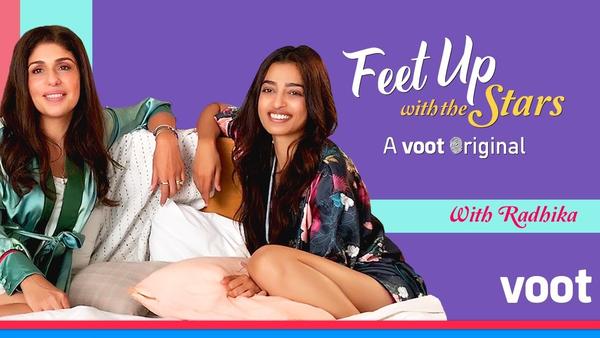 Recently Radhika Apte made an appearance in Feet up with the stars On Voot's new show. The actress has made some really strong points about the movie industry and has also mentioned about her love life and marriage.

Radhika Apte is a self-proclaimed introvert. The Pad Man actress made some stunning exposes that left us in a wonder of her. From Akshay Kumar calling her a 'National Award face' to tagging Konkana Sen Sharma as the most underrated actress in our industry, Radhika's honest answers and interesting revelations were a pleasure to hear.

Here are some of the confessions that Radhika made on the show:

>Since the long distance takes a peal on their relationship sometimes, Radhika's unprepared travel plans force her to travel economy.

>Radhika revealed that she was once offered a lead role in a big project by an alleged filmmaking banner. The actress then went to London for her acting course and when she returned to sign the same film, the makers had to politely say her no. Reason? Because they felt she had put on too much weight and was not suitable for the role anymore.

>She didn't disclose their names, she did give us a hint about one such project which is worked because of monetary reasons. It was a Tamil movie that she signed to repay her student loan.

>Radhika picked three handsome men from the industry. She revealed she wants to work with Ranbir Kapoor, Amitabh Bachchan and Rajkummar Rao.

>Radhika also mentioned that Salman Khan should not do parallel cinema as he is doing extremely well in Hindi cinema and there is no need to broaden the horizon at this time of his career.

Radhika’s honest answers were a treat to watch and we wish her all the success in her future endeavors.

Celebrities in this Article: Radhika Apte

Radhika Apte shares some fun bts of her upcoming film, find out

Radhika Apte raises the mercury levels with her latest pictures

Radhika Apte has husband Benedict Taylor's initials tattooed on her leg and it's hot!

Radhika Apte lends her support to 'OMH', an initiative started by young girls