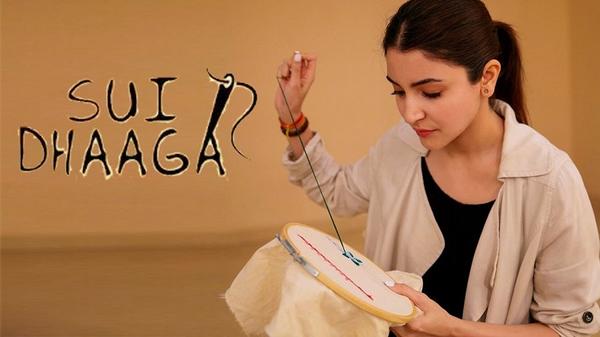 Nowadays production houses are finding new ways to promote their upcoming movies and not just with advertisements or fancy hoarders. Recently a Sui Dhaaga Challenge is going viral across the nation and it is a pace move to promote and advertise the movie ‘Sui Dhaaga’.

Actors Anushka Sharma and Varun Dhawan lately threw a stimulating challenge to promote their upcoming movie Sui Dhaaga that grasped the attention of many. “We want to see how fast you can thread a needle,” tweeted Dhawan while nominating Akshay Kumar for the challenge.

The challenge has ringed in Bollywood celebs’ keenness by nominating them in the ‘Sui Dhaaga challenge’. We earlier reported of actors Akshay Kumar, Karan Johar and Aditya Roy Kapur fail to the same while Alia Bhatt, Ranbir Kapoor aced it. The latest addition to this trend is Shah Rukh Khan who interestingly won the challenge. While Anushka declared him as the ultimate winner, he didn’t play fair.

Apparently, Anushka had challenged SRK by tweeting, “Anushka had tweeted, “Humne toh kar diya! Ab aap sab ki baari! @iamsrk, ready to thread the needle for the #SuiDhaagaChallenge? The challenge is open to everyone. So share your videos on social media tagging @yrf, @SuiDhaagaFilm with #SuiDhaagaChallenge & nominate your friends! #SuiDhaagaMadeInIndia.”

Isn’t this a fun way of promoting movies on social media platforms?

The 10 Day Challenge Diet Everyone is Talking About

What is the Birdbox Challenge, and Should You Try It?

Can You Win This 30 Day Plank Challenge?

Aamir Throws the Padman Challenge at Big B and Other Khans!

Sui Dhaaga: Anushka Sharma only take 20 minutes to get into the look

Sui Dhaaga first look revealed: Anushka and Varun transport you to another era

Sui Dhaga: Made in India

The Zoozoos Are Back!