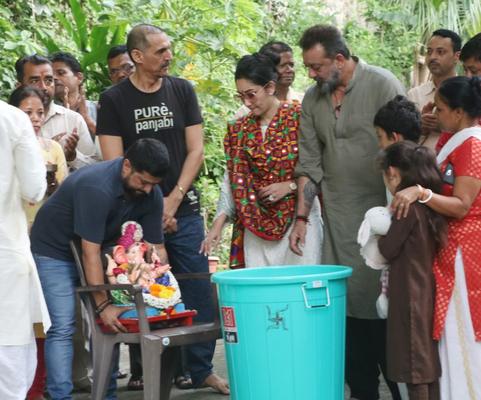 In recent events, many Bollywood celebrities have indulged into cleanliness activities. Sanjay Dutt and his family were snapped today rejoicing the propitious festival of Ganesh Visarjan. It looks like the Dutt family bid adieu to Lord Ganesha in an eco- friendly manner.

Many pictures from the celebration have been shared on the social media's feeds. In the photos, Sanjay can be seen celebrating the auspicious day with Maanayata Dutt and his children Iqra and Shahran Dutt.

The Dutt family can be seen with traditional outfits as they bid adieu to Lord Ganesha. They celebrated an eco-friendly Ganesh Visarjan keeping in mind the environment. Sanjay Dutt and Maanayata Dutt along with their kids adored Lord Ganesha and immersed the idol in a water tub at their house itself.

Well, as actions speak louder than murmuring voices, it seems like Sanjay Dutt has shown his concern for the environment during Ganpati Visarjan and made sure that he and his family is celebrating an eco-friendly Ganesh puja.

We should really admire and follow in the footsteps of the megastar to initiate an action to keep our environment clean.

B Town Stars at The Visarjan Ceremony