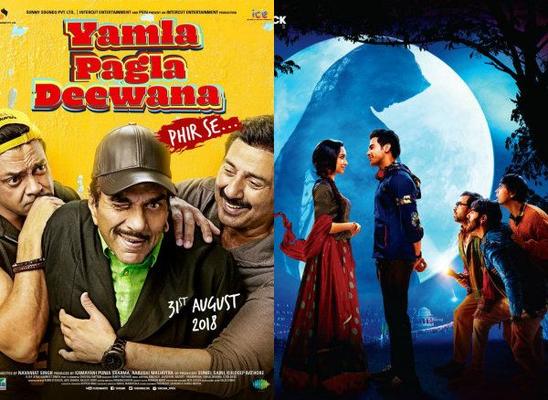 There are 2 really interesting films on offer this weekend.

Stree, which brings together Rajkumar Rao and Shradha Kapoor for the first time, is a horror comedy. If you have seen the trailer, you must have been interested in knowing the story of Stree. It seems to be a very captivating story and the genre of horror comedy remains vastly untapped in India. Though the lead actors are no Khans or other A-listers, both Shradha Kapoor and Rajkumar Rao have established themselves as fine actors and people love to wtch them. But can these 2 very good actors pull in the crowds?

Stree will work only if the story is really as good as the trailer. Word of mouth publicity can make this movie a big success.

Yamla Pagla Deewana Phir Se is the 3rd installment from the Deols in this YPD series. The first one was much loved by audince, the second was okeydokey. Will the 3rd YPD meet expectations from this illustrious family? We expect the film to have a decent opening as people still love Dharam ji and his sons. But the film can enter the top earning clubs only if people actually like the film and talk about it!

Since neither of the films has a crowd puller associated with it, the success really depends on word of mouth publicity. Which of these 2 films would you want to watch first?

Ek Villain Gets A Smashing Reception at Box Office!

Team Stree back together

Shraddha Kapoor scared her teammates on the sets of Saaho

Nora Fatehi to sing an arabic adaptation of Dilbar

This incident on the sets of 'Stree' revealed that Rajkummar Rao fears bats!

Is YPD 2 Worth The Price Of A Ticket?
LATEST EVENTS / GALLERIES
Most Read
...loading