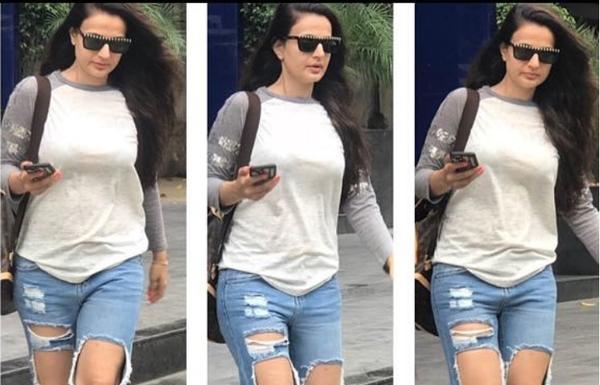 Social media has gone really harsh on Ameesha Patel this time. Recently a picture posted by Ameesha has received a lot of harsh and dirty messages on social media. Social media platforms, particularly Instagram, is one place where most of the actresses generate a lot of buzz because of constant trolling. Ameesha presently found herself at the receiving end of nasty trolls.

Ameesha had posted a series of photos of her recent shoot in black dress on Monday. As expected, her timeline was swamped with dirty messages with users looking for a sexual favor. Many battered her with libidinous comments on her breasts. The comments are so obnoxious in nature that they can’t be reproduced here.

Ameesha’s trolling continued without any stop a day later when she posted an additional set of photos in a sports bra, apparently shooting for a sports clothing brand. Her caption read, “And here is another picture from the shoot with @subisamuel .. SUBI u r addictive .. had such a blast shooting with u 15 days ago .. need to shoot together soon.“

While this photo induced some positive comments too as users appeared to have been taken aback by her fitness, there were many sick trolls, who continued to target her with objectionable comments. We just request trollers to stop trolling and start being respectful towards women.

Celebrities in this Article: Ameesha Patel

Why Did SidNaaz Fans Troll Devoleena?

Mira Kapoor Gets Trolled for Being a Celebrity Wife!

Katrina Caused A Rift Between Ranbir and Aditya?

Is It Possible To Lose 1 Kg Every Day?