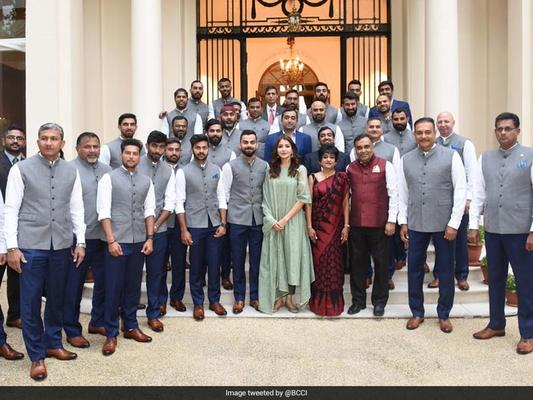 Anushka Sharma and Virat Kholi are one of the most loved couples in India. The Indian test team recently visited The High Commission of India in London. The photo of the team at India House was recently shared by BCCI, and captain Virat Kohli’s wife Anushka Sharma was also seen at the congregation.

Anushka Sharma’s presence came as a surprise as the Board of Control for Cricket in India (BCCI) had lined the wives and girlfriends of the Indian cricket team players from escorting their respective partners until the end of the third Test against England.

Anushka Sharma and Virat Kohli once again clutched social media’s attention. There are a few more photos of Virat and Anushka that are making the rounds on social media. BCCI also posted a picture of Team India from its official Twitter handle and the presence of the Bollywood actress in the photograph saw a lot of reactions from social media.

Well, Anushka’s entry into the National Cricket team summation was a surprise for all. While many disparaged her for getting special treatment, others didn’t see anything wrong with it. What do you think, was it right of Anushka to be a part of National Cricket Team?

Virender Sehwag: No setting with BCCI didn't get me Team India coaching job