What is the Eat Right Movement? 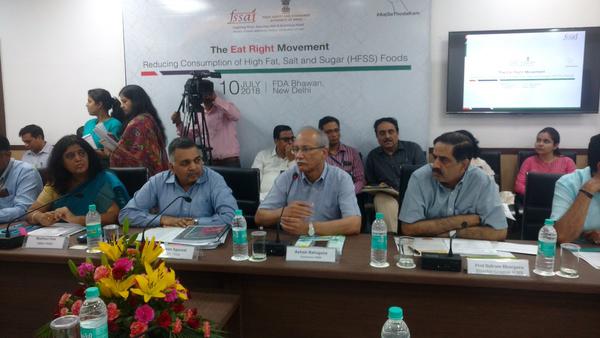 Eat Right Movement is a new start to eat healthily and the right food to maintain a healthy livelihood in the long run. Food Safety and Standards Authority of India (FSSAI) on Tuesday revealed ‘The Eat Right Movement’, built on two broad columns of ‘Eat Healthy’ and ‘Eat Safe’. The program targets to engross and permit citizens to recover their health and well-being by building the right food choices.

It is a deliberate and concerted movement built on two broad pillars – “Eat Healthy and “Eat Safe that encourages people towards making right food and dietary choices. It focuses on both sides- demand and supply side to come together.

FSSAI CEO Pawan Agarwal said the program can grow spontaneously as a self-perpetuating movement, co-owned and co-led by various partners using the broad agenda and resources put together by experts and authorities in the field of food and nutrition.

Stating that its aim was to cut down salt/sugar and oil consumption by 30% in three years Mr. Aggarwal said that 15 major food manufacturers have now joined the program. The FSSAI, he said, “is looking at robust food labeling and cleaning up the claims space.”

It is a nation-wide movement to help people eat safe, eat healthy and eat right at their workplaces. We truly support the initiative in this regard.

Tips to Sneak Nutrition into Your Family's Diet

What Do You Think About the Demonization of 'Ghiya-Tori' By McDonald's?

How to Eat With a Low Carbon Footprint?

Eating Nuts is Good for Your Health, but Don't Overdo It!

A Museum for Indian Recipes is on the Cards!

We have to keep conversation alive, says Kareena Kapoor Khan on #MeToo movement

I don’t see too much of a change, Malaika Arora on India’s #MeToo Movement

Soha Ali Khan: It’s difficult being a woman in India

Twinkle at Oxford: Hope ‘Padman’ is a movement where biology doesn’t embarass women

Kareena Kapoor At The Unveil Of Rujuta Diwekar's DVD

Prachi And Sundeep At Oral B Smile India Movement 2013

Salads That Give You Loads of Protein

Did You Ever Try a Baked Medu Vada?