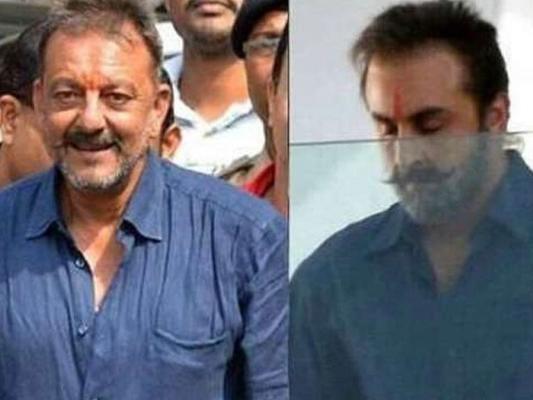 Film Sanju has become a big release, possibly bigger than the team behind it expected. The film, cast and crew are all basking in glory of success and appreciation. The thing that people have loved most is how Ranbir Kapoor resembles real life Sanjay Dutt, and to such a large extent. Do you wonder how did Ranbir Kapoor suddenly start looking like Sanju Baba?

When Raju Hirani suggested that Ranbir Kapoor could possibly play Sanjay Dutt, Vidhu Vinod Chopra was a little surprised. Ranbir Kapoor was not at all sure that he could play the iconic role, when Raju Hirani approached him. The biggest challenge that faced this little team was to make Ranbir Kapoor look like Sanjay Dutt physically. The first object was for Ranbir to achieve the physicality. Everyone knows that Sanjay Dutt was very much into body building and had big bulging muscles at the height of his career. Ranbir Kapoor, in comparison looked so thin and frail!

Ranbir was given a strict diet and exercise regime, which he followed to the T. He ate 8 meals in a day. He even woke up at 3 am just to drink a protein shake! After serious hard work, Ranbir Kapoor was able to transform his body and make it look more muscular like Sanjay Dutt's.

The next challenge was to achieve facial resemblence. Ranbir was already working on learning Sanjay Dutt's mannerisms. A team of make up and prosthetic experts was hired to achieve the facial resemblence. Ranbir had to sit in a chair for 6 hours as these artists worked their magic to transform his facial look. But within 30 seconds, Raju and Vidhu would reject it. This was done many times, before finally the Sanju look on Ranbir was okayed by the team.

So as you see, Rabir did not become Sanju as easily as you might think. The film is an honest portrayal of Sanjay Dutt's controversial life. But it is also a journey of hard work and determination by the cast and crew of this film.