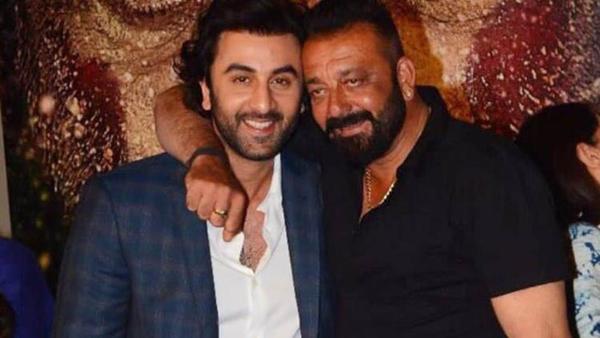 Sanjay Dutt’s biopic got released today and has already created a great business on the starting date. While everyone can't delay seeing Ranbir Kapoor play the role of Dutt and share his life story on the big screen, here comes a good news for all you Sanjay Dutt fans.

The movie ‘Sanju’ has a cameo of Sanjay Dutt and we cannot be more excited to see Sanjay Dutt and Ranbir Kapoor sharing screen for the first time. A clandestine that the filmmaker Rajkumar Hirani had kept hidden so far is now out in public. The mega-star himself, Sanjay Dutt, will be seen making a special entrance in his biopic. Though the news has just knocked on the door, a day before the release of the film, but it positively adds to the exhilaration for the much-awaited biopic of the year.

A picture of Sanjay Dutt with Ranbir has gone viral on the internet, and if rumors are to be believed, he will be seen in a promotional number. In the leaked picture, Sanjay and Ranbir are seen matching in a black suit.

Earlier, Mr. Hirani had spoken about his quandary of casting Sanjay Dutt for a brief period in the film. "The thought of Sanjay as his older self in the film’s final portions had crossed my mind for a moment, but then I let it go as I felt it would be too abrupt and weird. For one, you are seeing Ranbir as Sanju throughout most of the film, and then suddenly, you see Sanjay playing his older self, which would have automatically disconnected the public's link with the film. Also, it's not possible to play yourself in the biopic as people will not buy it and the film will look untrue," Hirani told a leading media house.

Anyway, the filmmakers got Sanjay Dutt for a promotional video as a good charm for the film. Are you excited to see Sanjay Dutt in Sanju?