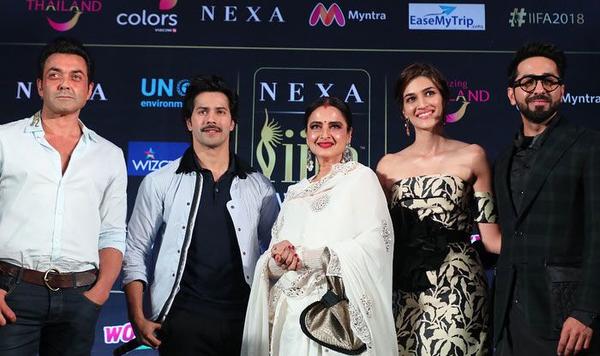 All Rekha fans have a new reason to be excited for. Trouper actor Rekha will be performing on stage after 20 long years at the upcoming International Indian Film Academy (IIFA).

All through the IIFA press conference last night, actor Varun Dhawan publicized that Rekha’s performance will be the “highlight” of the ceremony. As Varun was invited on stage, he said with excitement that, “For me, it is going to be such a big highlight to see her (Rekha) perform live. I know a little bit of her act and to seeing that live is going to be a huge thing.” When Rekha herself was questioned about the songs on which she would be performing on, the veteran actor said, “I have a second name- mystery. If I tell you now, then what’s the point?”

Are you excited to see Rekha on stage after close to two decades? Well, it will be a fun night to visualize the epitome of beauty on television for sure.

Celebrities in this Article: Rekha

Will You Watch Super Nani This Weekend?

Why Did Rekha Say No?

Photos Of Bollywood Celebs Spent The IIFA Weekend At USA

Hrithik Roshan Present At The IIFA 2014

Bipasha Basu Rock On Performance at IIFA 2012 in Singapore

Press Conference For Performance Of IIFA

Shadow Dance That Will Bring Tears To YOur Eyes