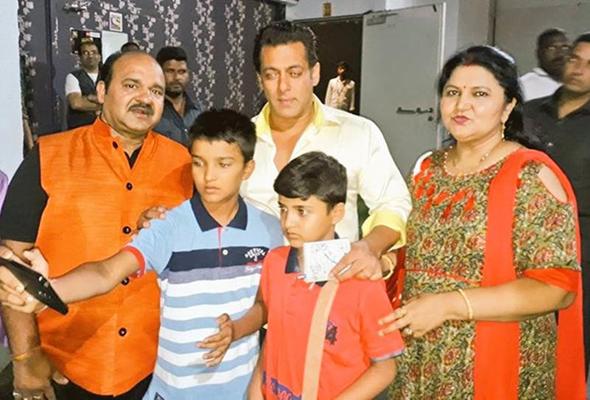 Yes, the news is completely true. The dancing uncle, aka Sanjeev Shrivastava, got an opportunity to meet Salman Khan on the sets of his reality show Dus Ka Dum. The 46-year-old assistant professor along with his wife and kids even got a chance to take a picture with Salman Khan. He shared a couple of pictures on Twitter and shared his experience after meeting Salman. He wrote, “Me & My Family with @BeingSalmanKhan Bhai on sets of @duskadum2018 @SonyTV.”

The dancing uncle video went so viral that even Bollywood stars could not stop applauding. After the video went viral, Govinda said that Mr. Shrivastava's dance is 'mind-blowing.' In an interview to a leading media channel, Govinda said, "I love his moves. Sanjeevji's dance is mind-blowing and out of the world. I hope we see more of him in the future."

It seems like Sanjeev Srivastava rose to fame after his video of him and his wife dancing to Govinda’s 1987 film Khudgarz song ‘Aap Ke Aa Jane Se’. We are happy that Sanjeev Srivastava got a chance to share a stage with none other than Salman Khan.

Alankrita Shrivastava speaks on her journey with Lipstick Under My Burkha

Prakash Jha’s 'Lipstick Under My Burkha' screened for FCAT

Ranveer Singh Dance Parties At The Park Hotel In Kolkata