Someone Trashed Ekta Kapoor Shows, and She is Clearly Not Happy! 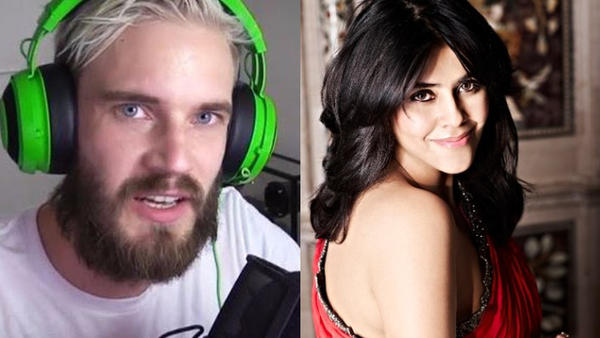 Ekta Kapoor is unhappy these days. Yes, you heard me right, the queen of Indian television is clearly not happy because of a Swedish You-tuber who took a dig on Indian serials produced by her. Ekta Kapoor whipped Swedish Youtuber PewDiePie over a serial which went off-air 9 years ago. The web-based comedian took a dig at it by tweeting it out on his fodder which made Ekta breakneck and took to social media to lash out at him.

The online war started when Swedish YouTuber PewDiePie took a dig at Ekta serial Kasamh Se’s title track which was released 9 years ago. The well-known Swedish web-based humorist came across the video and wrote a funny description about the irony of its bad quality by posting it on his Twitter account with the caption, “good quality.”Ekta whipped him by replying who he was and further telling him that he looks like a junior artist they hire from Colaba in Mumbai for their shows, Ekta tweeted, (“Bhai tu kaun hai! Luks like d firang junior artists we hire from colaba when we Create Paris in array. He will find his dopplegangers in kasam se only.”) Kasamh Se was a daily soap that aired between 2006 to 2009.

The Youtuber took a screenshot of the original song which had poor quality and seems like he was having fun posting it on his social media account. Well, it is very clear that Ekta will be upset for something she has put her heart and soul. Don't you think the same?

Celebrities in this Article: Ekta Kapoor

End of Story for #PewDiePie?

Mouli Ganguly Is Back!

“I Think Ekta Is Very Sexy”

Ekta Kapoor to remake 'U Turn'

Finally a Trailer of Bombay Velvet