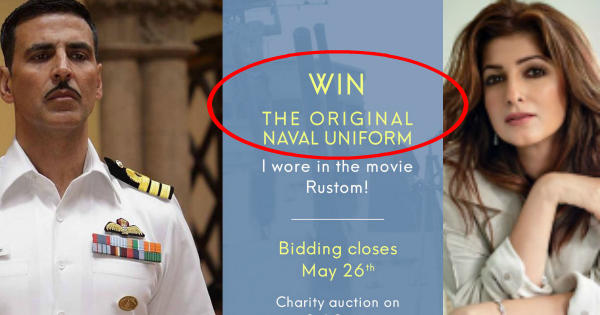 The defense officers have indicted the Bollywood couple of “playing with the sentiments” of the navy forces and said that it is offensive that the actors had itemized the costume as an “original naval uniform”.

As per the legal notice letter, the claim states that, “Uniforms resembling those of the armed forces pose a potential threat to national security as the said uniform, insignia and badges could pass for genuine service clothing and can find their way to anti-national elements who can use it to foment trouble.”

The auctioning of the uniform has rubbed some serving and ex-soldiers the wrong way, claiming that “by putting (it) in an auction, the actors have shown no respect for national interest (and) have also played with the sentiments of armed forces personnel and their widows and their family members”.

The Bollywood couple has appealed that the money raised from the auction was to be used for social causes and 90 percent of the net proceeds from it would support NGO Janice’s Trust, an animal rescue service, treatment center and shelter based in Panchgani in Maharashtra.

Well, it looks like this time Akshay Kumar and Twinkle Khanna have to deal with this legal mess for real.

Guess Which Films Twinkle Khanna Wants to Ban and Why!!!

Twinkle Khanna: We are equal, not identical

PM Narendra Modi takes a jibe at Akshay Kumar, Twinkle Khanna's marriage, says he's glad he is useful for them

Akshay Snapped At Mumbai Airport With His Family

Happy B'day to one and only Akshay Kumar (Sept 9)