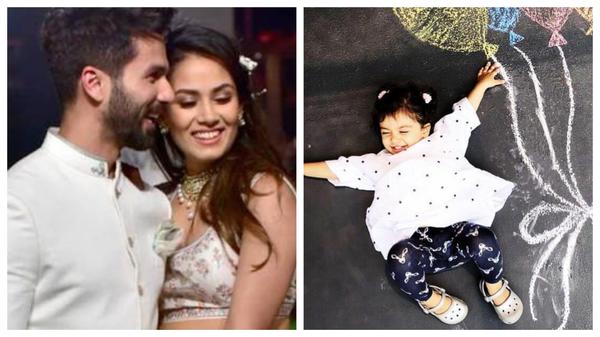 Shahid and Mira are going to have their baby number two very soon. Shahid confirmed his wife's pregnancy in an adorable post on Instagram. He shared a picture of their daughter, Misha, next to a drawing of a bunch of balloons along with the words 'big sister'.

Shahid actually did the announcement in a unique way on social media. The 37-year-old actor actually made Misha do the talking in this adorability overloaded photo. He uploaded a photo of Misha on Instagram, lying against a set of hand-drawn balloons, with 'big sister' written in the background! No points for guessing that Shahid's post went crazy viral within minutes of being shared with his actor brother Ishaan Khatter and colleagues Arjun Kapoor and Malaika Arora were the first ones to 'like' the post. Shahid's post amassed almost 2 lakh 'likes' within an hour.

Mira also shared the adorable photo on her verified Instagram handle, with fans and followers congratulating the couple about the big news. Well, in July last year, Mira Rajput trended a great deal after she told mid-day that she will only make up her mind about joining work after her second baby. When asked if she has a deadline to start a career, she said: "No, because I am going to have another baby, and then decide.

It seems to be a good news for the Kapoor family. We heartily congratulate the couple.

It's a Baby Brother for Little Misha!

Misha Kapoor Already Has Offers for Ads - Will Shahid Accept Them?

Misha is Out for Her First IIFA Appearance, and We Love It!

So adorable: Candid pictures of Zain Kapoor and Misha Kapoor

Shahid Kapoor and Mira Rajput blessed with a baby boy!

Adorable pic of Shahid Kapoor with Misha in his Pool

Daddy Shahid keeps baby Misha away from paparazzi at airport