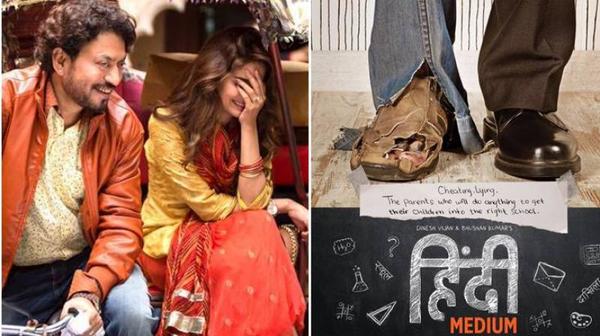 Irrfan Khan is making headlines in almost all news channel recently. Irrfan Khan's commercially and critically commended drama Hindi Medium, which got released in China on 4 April for the Qingming festival weekend, has taken a humongous start at the box office. The film grossed a decent start in its opening weekend in India when it hit screens last year in May 2017 and is raising the bar of cinema in China too.

The enormous retort for Hindi Medium from Chinese moviegoers substantiates the fact that they are mostly vigilant of positive word-of-mouth than star power. The opening day gross of Hindi Medium has also out-grossed the cumulative China box-office receipts of Shah Rukh Khan's three outings in the mainland – My Name Is Khan, Happy New Year and Fan – that earned a paltry total of $680,000 approximately. The Saket Chaudhary-directorial has also supplanted the lifetime China revenue of Aamir Khan’s PK ($1 million), Dhoom 3 ($3.1 million) and 3 Idiots ($2.2 million).

Hindi Medium, which is produced by T-Series and Maddock Films, sustained its magnificent recital with a day two gross of $6.26 million (Rs 40.6 crore) yesterday, taking the running China total to $9.69 million (Rs 62.85 crore). Now, the foreign sum of the film, including the two-day PRC takings, stands at $11.69 million (Rs 75.83 crore) and the worldwide gross has quietly vaulted over the Rs 150 crore mark to touch a gigantic Rs 172.48 crore, factoring in the lifetime India revenue of Rs 96.65 crore.

Hindi Medium is written by Zeenat Lakhani and directed by Saket Chaudhary. It is a remake of the 2015 Malayalam-language film Salt Mango Tree and it made over 102 crores worldwide when it released in 2017.

Rajinikanth And Akshay starrer 2.0 postponed, will release in January Next Year

17 Lakh For A Car Registration Number, Crazy Or What?
LATEST EVENTS / GALLERIES
Most Read
...loading